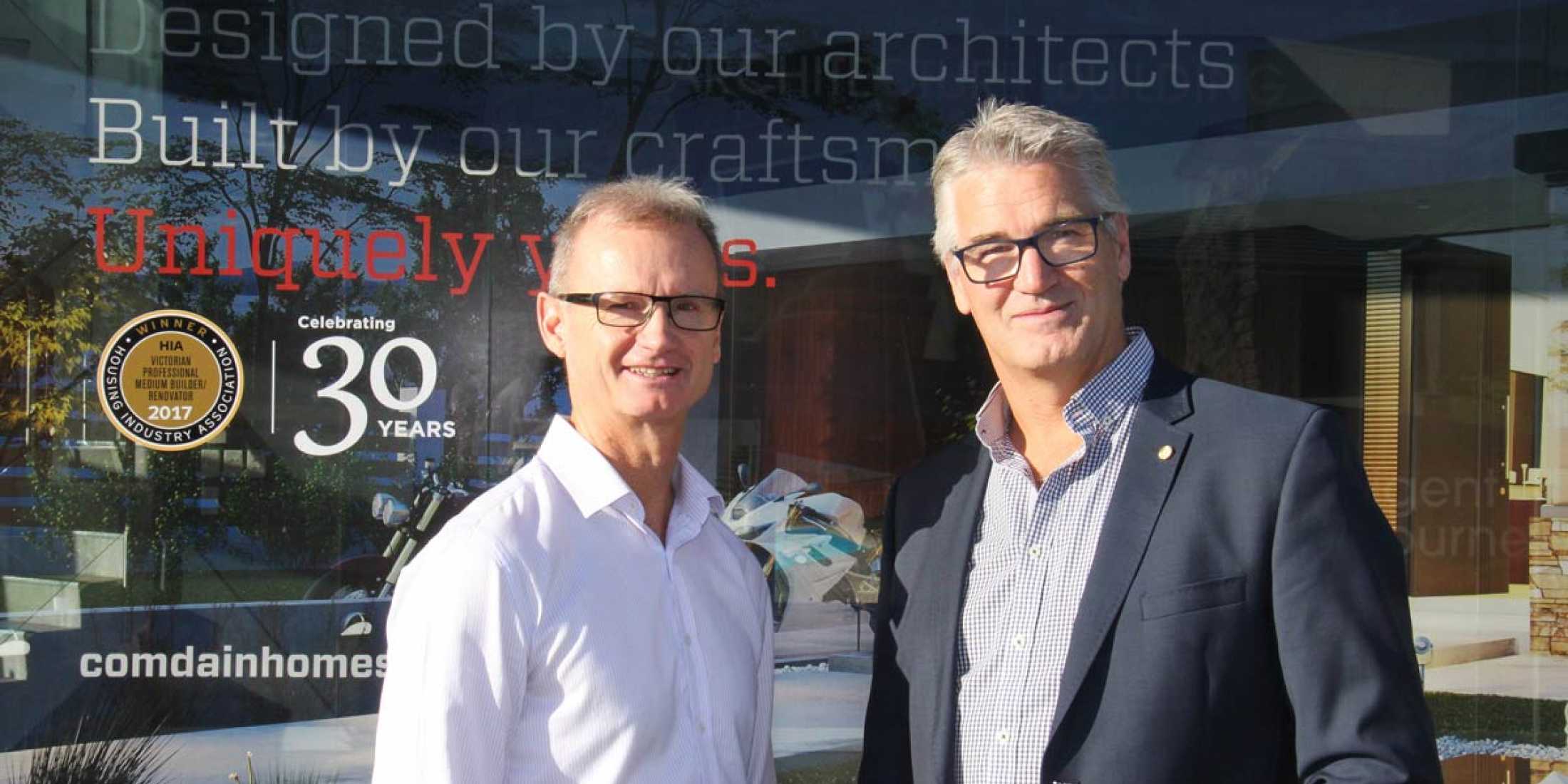 Posted: 7 Apr, 2020
Auther: Craig Edwards
Founded in 1987 by James and John Coen, Comdain Homes is this year proudly celebrating 30 years of building custom luxury homes in Melbourne. If one word could sum up the past 30 years, it would be passion.

As managing director, John Coen, says, “The passion’s still there: we’re very passionate about what we build, how we build it, how we put things together, passion for the people around us. If you haven’t got that passion, you might as well stay at home.”

We caught up with the brothers to find out more.

WHY DID YOU START THE BUSINESS?

It was a passion to build more than anything. We believed we had a better idea of what needed to be built to be ahead of the pack, a step above the rest. So we built the business on quality and craftsmanship, that’s always been our main focus.

To achieve the quality, we did a lot of the work ourselves. We had a plumber who worked with us, but we did most of the trades – site cuts, the concrete footings, drainage, stormwater sewage, all the framing, carpentry, everything down to the site cleans and the house cleans.

We did it all ourselves and what that did was set a foundation of knowing how to do things and do things right, and that set a benchmark to achieve consistent quality. As we grew and needed to bring in trades, because we’d done all the work ourselves, we knew what was required and therefore we were able to bring in quality trades and quality people. 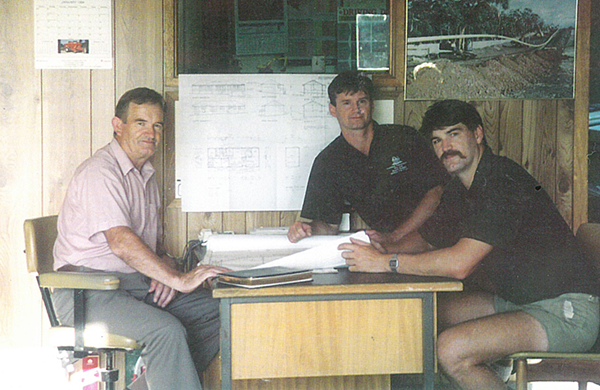 YOU HAD A PLAN TO RUN YOUR OWN BUSINESS?
Yes, from the age of 23, although when we started, we didn’t have an exact vision of what we wanted or where we wanted to go. Our first projects were spec homes in Mill Park. John remembers brazenly knocking on a Mill Park architect’s door and saying “I want a plan”. “What are you up to, what do you want a plan for?” came the reply.

We got some building plans and off we went. We employed a plumber, Bob Brown, who also had a lot of carpentry experience, and between the three of us we built spec homes.

There was no aim of being big like an AV Jennings, we just wanted to fuel our passion to build. We were fortunate in those early days in Mill Park which was a big growth corridor. As we were buying blocks to build on, they were increasing in value 20-30% so at the end of build, we were making money on the land as well as the house. We did four or five spec homes before the first client orders started to come through and things took off from there.

Formal dining was big, the rumpus room and ensuites were also in demand. In the kitchen, Laminex tops were the standard and reconstituted stone wasn’t yet available. Stone tops – marble and granite – was just coming in and it was very high end to use stone tops in the kitchen. Outdoor, alfresco entertaining wasn’t around, it was just a simple decking and pergola overhead.

YOU’RE NOW BUILDING CUSTOM LUXURY HOMES STARTING FROM $700,000. WHAT WAS THE COST OF YOUR FIRST HOME?
We bought our first block of land for $22,000 and our second block for $29,000. The first build cost was in the region of $45,000. So costs were pretty much one third land, two thirds house, whereas today with most house and land, it’s the other way around. We sold our first house for $95,000.

Our first client order was for a house in Kamarooka Drive, Diamond Creek. It was for the brother of a client who’d bought one of our spec homes, his brother placed an order for us to custom design and build a home for him.

WHO WAS DESIGNING THE HOUSES IN THE EARLY DAYS AND WAS THERE A COMDAIN HOMES STYLE?
Like we do today, we would work with the client, but we also had a few different designers. One of the early ones, was Gary Gardiner, a civil engineer, who worked with us part time.

A lot of our homes had sandstone corner blocks and earthy bricks – we’ve kept that natural look and our carpentry background has meant natural timber features strongly in our homes.

Design wise we’ve always tried to push boundaries. Looking back, some of the early floorplans appear pretty standard, but even in the early days we were pushing boundaries in different things we were doing. The Comdain look was brand new and was copied numerous times – to the extent the paint we used became known as ‘Comdain Blue’ at the local Bristol paint store in Bundoora!

We were constantly looking for concepts, materials or something that would separate us from everyone else. We did an energy efficient home, a breath easy home, a smart home; we were always looking to be the next level. From day one, we’ve always spec’d our homes well and have been up front in what we’re selling – this is the spec, this is what you get.

YOUR FIRST DISPLAY HOME WAS BACK IN THE EARLY 90S. HOW MANY DISPLAYS HAVE YOU HAD?
Our first display home was The Oxford, located in Blossom Park. It was only open on weekends and we manned it ourselves. We didn’t furnish it: our big catch cry was we’re not furnishing the house because we’re not hiding our quality. We’d rotate working on Sundays and when we caught up on Monday we’d ask how the other went on Sunday and usually the reply would be, “Well, I think I made a lot of friends.” “Did you get a sale?” “No, but I made a lot of friends!”

In total we’ve had 16 display homes. Currently we have the Belle Vue in North Balwyn, the Urbane Forster in Camberwell and we have plans in the pipeline for a new display home in Surrey Hills.

Yes, we’ve always tried to get professional people that can grow with the business, but also fit in with the business and the way our ethos is too. The way we want our clients treated is the same way we would treat them ourselves.

ARE THERE ANY MILESTONES OVER THE LAST 30 YEARS YOU’RE REALLY PROUD OF?
To see the business grow from the two of us, then to have staff and supervisors has been rewarding. Seeing the office change from where we started in the garage, to an office in Epping, which we built ourselves. We thought when we first moved in, how proud were we, not only just John and I, but our other bothers, we were really proud to stand there and say “Wow, look at this, we’ll never fill this.” And then we grew and out grew that office and moved to a new premises here in Fairfield.

The first MBA award night we went to was pretty special. We didn’t win anything but we got a commendation. It felt good to be part of the whole building community, it was a great feeling and made us proud to be builders.

WHICH BRINGS US NICELY TO AWARDS. YOU’VE WON OVER 30 AWARDS IN THE LAST 30 YEARS, WHAT DOES THAT MEAN TO YOU?
Wining the HIA Most Professional Builder of the Year award is fantastic – it’s recognition for all of us, it’s a team award. It’s not just judged on one home, it’s judged on your financials, your business plan, your customer service, your staff. It means a lot to win that award.

When we win an award the benefit of the buzz going through the business is great. Everyone gets really excited about the win, which is good because everyone is part of it, they’ve been part of the journey, so to be recognised by the industry is really good. The same with clients and prospective clients, and the client’s who’s home it is, they’re really excited to have their home entered into awards.

WHERE DO YOU SEE THE BUSINESS GOING OVER THE NEXT 30 YEARS?
The fire’s still in our belly for the passion of what we do. Our space, the way we like to do things and the passion we have, is custom luxury.

The 30 years gone has been like a learning process: for 30 years we’ve been building and learning, and grown. We’ve done a myriad of things and we’ve dealt with many different clients. All that is part of an education which has brought us to this point. Our intention for the next 30 years would be to get all those fundamentals which we do well, and pass them on through the business and our staff.

We’ve seen over the years builders come and go, and we’re a constant: we hope the business is going to evolve and be stronger.

LOOKING BACK, IS THERE ANYTHING DIFFERENT YOU MIGHT HAVE DONE?
James laughs and says, “I would have bought a lot of land in Mernda and South Morang! I used to catch the school bus and think who would ever live out here? They couldn’t give the land away. If we’d done that, we wouldn’t be sitting here now talking to you!”

John concurs, “I don’t think we would have a done a lot any differently. We’ve had a ball, making people’s dreams and building the relationships with our clients, suppliers and trades – we wouldn’t change any of that, it’s been fantastic.”